Lee Morgan was a jazz musician. Brash, crisp, and soulful. Last fall, in October 2016, a new documentary was released about Lee Morgan. It was released at the New York Film Festival. The U.S. premiere is tomorrow (03.24.17).

Lee was killed in 1972, at the age of 33, by his common-law wife Helen. He was between gigs at a jazz club called Slugs' in New York City's East Village.

The early 70's was a particularly hard time for jazz. The creative beat and soul of the genre seemed to be on trial at the start of the decade. Louis Armstrong died July 6, 1971. The free-spirited jazz men were contained, almost put into a box, where they were examined and criticized. This scene made a discourse for a reactionary style that had left several enthusiasts confused, but wanting what they craved: original and way out stylists. Lee Morgan was one of those musicians. He dug deep when jazz needed it. Jazz needed him. That particular notion was in its infancy when Lee was killed.

I Called Him Morgan is the documentary made by Kasper Collin. Lee's life emerges from video interviews with his friends and fellow musicians. Several of his friends are still mulling over his death. An audio interview with Helen, Lee's wife, is also included. This interview was conducted in 1996, shortly before she died. Helen's monolog determines the mood of the film.

No one is reduced to a symbol in this film. Lee was made a project by Helen. She had made her apartment in Hell's Kitchen a studio for jazz musicians. She was an on and off again jazz singer. Her aspirations are still not clear but it's apparent she loved music and Lee. He had started to see another woman and this led to the confrontation that killed him. 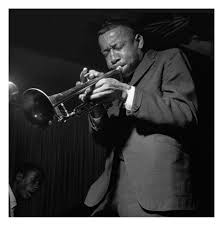 The film is energized by the people who knew Morgan. Morgan's style of hard bop was a simplification of bebop. He created a musical paradox, an infusion of blues with bop's harmonious complexity. The original, way out Lee Morgan broke out of the box of criticism and examination.
His music was open and free. His music pushed hard-boppers into free jazz.  The film is a moving portrait of a great musician who was cut down way too soon.